The Galileo spacecraft carries an Energetic Particles Detector (EPD) designed to measure the characteristics of energetic particle populations important in determining the size, shape, and dynamics of the Jovian magnetosphere. EPD was developed by the Johns Hopkins University Applied Physics Laboratory (JHU/APL) in collaboration with the Max-Planck-Institut für Sonnensystemforschung (MPS), Germany, as part of NASA's Galileo Program.

The main scientific goals of EPD are: 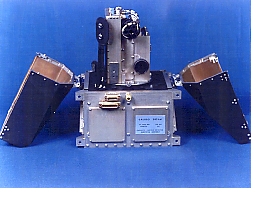 The energetic particles detector (EPD) is designed to measure the numbers and energies of ions and electrons whose energies exceed about 20 keV. (An electron volt, eV, is the unit of energy equal to the energy that an electron acquires in falling through an electrical potential of 1 volt.) The EPD can also measure the direction of travel of such particles and, in the case of ions, can determine their composition (whether the ion is oxygen or sulfur, for example).

The EPD uses silicon solid-state detectors and a time-of-flight detector system to measure changes in the energetic particle population at Jupiter as a function of position and time. These measurements will tell us how the particles get their energy and how they are transported through Jupiter's magnetosphere.

The EPD weighs 10.5 kilograms and uses 10.1 watts of power on average. EPD measures the detailed energy and angular distribution of the following: