The Scientific Imaging System for Rosetta 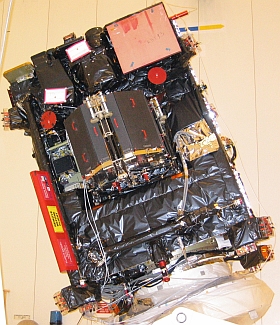 OSIRIS (Optical, Spectroscopic, and Infrared Remote Imaging System) is the main scientific imaging system on the orbiter of ESA's

OSIRIS comprises a high resolution Narrow Angle Camera (NAC) and a Wide Angle Camera (WAC). The NAC is designed to obtain high resolution images of the surface of comet 67P/Churyumov-Gerasimenko through 12 discrete filters over the wavelength range from 250 to 1000 nm at an angular resolution of 18.6 µrad/px. The WAC is optimised to provide images of the near nucleus environment in 14 discrete filters (240-720 nm) at an angular resolution of 101 µrad/px. Both cameras are equipped with 2048 x 2048 pixel CCD detectors, and have an off-axis optical configuration.

After the launch of Rosetta (2nd March 2004), OSIRIS was commissioned in seven slots between March 2004 and June 2005, and has been activated on several occasions before Rosetta arrives in 2014 at its main target, comet 67P/Churyumov-Gerasimenko. OSIRIS already performed several important scientific observations:

The main objetive of OSIRIS is to study the physical and chemical processes that occur in, on, and near the cometary nucleus. In particular, OSIRIS allows researchers to determine the outflow of gas and dust from different regions of the cometary nucleus, and to compare active areas with deviations in surface mineralogy, in topography, and in local insolation. The main science objetives of OSIRIS are:

The OSIRIS cameras are unobstructed mirror systems, equipped with two filter wheels containing 8 position each, and with backside illuminated CCD detectors comprising 2048 x 2048 pixels with a pixel size of 13.5 µm. Both cameras use identical image acquisition systems, consisting of the Focal Plane Assembly and the CCD Readout Box. The following two figures show the two OSIRIS cameras (NAC and WAC).