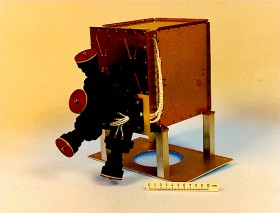 The Energetic PArticles Composition instrument EPAC was designed to provide information on the flux, anisotropy and chemical composition of energetic particles in interplanetary space. We decided to use four identical telescopes inclined under angles of 22.5°, 67.5°, 112.5° and 157.5°, with respect to the spacecraft spin axis. This design, together with spin sectorisation, allows us to sample 80% of the sphere in 32 bins and therefore get a fully three-dimensional resolution of anisotropies. In each of the telescopes we used the so-called "E-dE/dx" technique, which requires a particle to traverse a very thin detector and then stop it in a second, much thicker detector. Particles of higher energies can traverse the two detector stack, but are eliminated by a third "veto" detector. Each telescope has a geometric factor of about 0.08 cm²sr and has a field-of-view with a full angle of 35°. 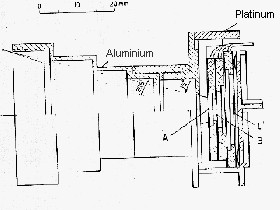 As a front detector we used an very thin semiconductor detector with a thickness of 5 µm and 25 mm² sensitive area (detector A). Such detectors became available in reliable technique by the time when we started to build the instrument. The energy detector B was 100 µm thick. A third detector (C) of much larger area provided veto signals from penetrating particles. The detector stack is surrounded by a massive platinum shield. Further background rejection is realised by using multiparameter analysis. The front detectors are protected against sunlight by 80 µg/cm² Al-layers. By using hybrid electronic technology we were able to make this fairly complicated instrument with very low weight (2685 g) and power demand (3.43 W). 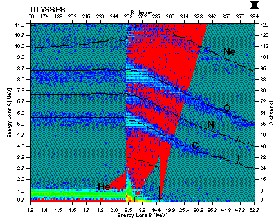 The telescopes based on this design allowed clear separation of Hydrogen, Helium and the heavier nuclei up to iron. The Event-Data-Plot shows an example of such measurements in interplanetary space in a plot, where the energy losses in detector A have been plotted against those in detector B (x-axis). All four telescopes operate in a self-calibrating mode, where particle tracks can be used to obtain absolute calibrations.

14 different categories of data are transmitted to the ground, using different time and angular resolutions for the various categories. In flight a functional performance test using a pulse generator, which on command produced sequences of coincident and non-coincident pulses is initiated from time to time. The sensor was designed to operate at temperatures between +10°C near Earth and -35°C at Jupiter.

On October 19, 1990 the instrument was turned on for the first time; it stayed on since then and has delivered its data. About 30 papers have been written on the interpretation of the measurements, and more than 50 talks have been given at international conferences. Scientists involved in the project are E. Keppler, A. Korth, M. Fränz, N. Krupp, M.K. Reuss, R. Seidel, U. Lauth, J.B. Blake, J.J. Quenby, B.F. Drolias, X. Moussas, M. Yamauchi.