Table of technical parameters below.

The centerpiece of the IIMS sensor system is the so-called SCENIC detector head. The acronym stands for "spectroscopic camera for electrons, neutral and ion composition". In essence SCENIC is a miniature telescope composed of a time-of-flight (TOF) and energy (E) detection system. The noval aspect is the imaging of flux distributions and the capability to identify energetic neutral atoms (ENA) in a certain energy band.

The particle identifying function of the SCENIC spectrometer is obtained from a two-parameter measurement: The particle velocity (V) and the energy (E) are measured as independent quantities, the particle mass A is then uniquely determined either by computation (A E/V2) or by statistical analysis in two-dimensional (V, E) space with the mass A as the sorting parameter. Actually the velocity detector measures the flight-time (T) the particle needs to travel a known distance in the detector geometry. 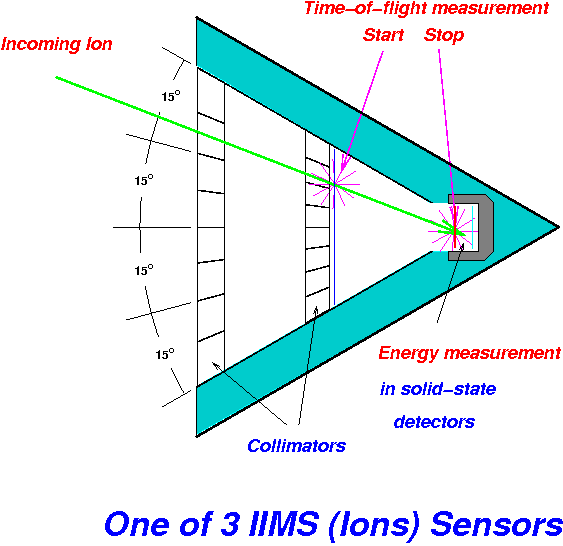 The figure shows a cross-section of the SCENIC detector. A particular feature is the triangular structure with a 60° opening angle. The energy measuring solid state detectors (SSD) are mounted in the apex at the rear of the system. A group of two SSDs (an energy detector ED and a back detector BD) is combined in an anticoincidence condition for high energy electron detection. The flight-time (T) measuring system is the entry element of the telescope. It is essentially composed of a thin foil (5 g/cm2 carbon foil with Al coating) and the front surface of detector ED. The distance between the foil and detector ED along the line of symmetry is the nominal flightpath s for the T-measurement.

Particles passing through the telescope release "secondary electrons" (SE) from the entry foil. The SE are accelerated and directed to a microchannelplate (MCP) for detection. The MCP output signal constitutes the START signal for the T-measurement. Upon impact of the particle on detector ED secondary electrons are ejected from its surface as well. These SE are transferred to the STOP-MCP by a technique similar to the start electrons. The STOP signal completes the T measurement.

The energy E of the incident particle, reduced by the loss in the START foil, is measured in detector ED. For sufficient high energies the particle is able to penetrate detector ED and to strike the back detector (BD). This leads to the elimination of the event from analysis.

The START foil is shown as an elongated rectangle. The design of the START-system is such that the SE transfer to the MCP is not only isochronous but also position preserving: Four read-out anodes behind the START-MCP (not shown) correspond to four contiguous segments on the entry foil and each of these forms a 6° by 15° viewing cone with the ED detector in the back of the system. In a sense this geometry can be considered a degenerated case of a "projection camera" with only one pixel in the back plane. In this special case the "virtual" image plane coincides with the entrance foil.

Incident particles are strongly collimated before they reach the T/E-telescope. Two microchannel collimators define a highly anisotropic field-of-view (FOV) with 6° lateral and 60° polar opening. A set of plates between the collimating elements with alternating potentials (0 and +Udef) forms a linear electrostatic deflector (DEFL). The primary purpose of DEFL is to protect the instrument from overloads due to large fluxes of low energy particles (e.g. solar wind plasma). Some selected technical parameter of the SCENIC head are listed in the table below.

The relative high gain of the active collimator (approx. 10) allows efficient separation of energetic neutral atoms (ENA) from ions for energies up to 100 keV. This energy band is generally considered important for magnetospheric neutrals produced in the ring current region.

Technical parameters of the SCENIC head

*The high-quality foils were manufactured by the Luxel Corporation, Friday Harbor, WA (USA)