Instrument onboard the Cassini spacecraft

The Hydrogen Deuterium Absorption Cell (HDAC) is part of the

The Cassini project is a

NASA mission being built at the Jet Propulsion Laboratory (

The HDAC will do measurements of resonant scattered solar Lyman-alpha radiation to determine the Hydrogen to Deuterium ratio of Saturn's and Titan's atmospheres. These results will lead to a better understanding of the origin and evolution of the solar system, it's planets and their satellites.

The detector is a

ceramic channel electron multiplier. It was developed at the MPS by Hans Lauche. 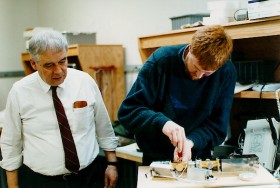 MPS has built a Lyman Alpha photometer for the Cassini mission to Saturn. The instrument is a Hydrogen Deuterium Absorption Cell (HDAC). The HDAC represents a cooperative effort between the Max Planck Institute for Solar System Research in Lindau, Germany, and the Laboratory for Atmospheric and Space Physics (

How the HDAC Works

The HDAC is a photometer designed to measure the D and H Lyman Alpha lines (at 121.53 nm and 121.57 nm). It is capable of measuring the shapes of these two lines and the atomic D/H ratio on Titan and Saturn. The instrument consists of a UV detector equipped with gas filled Hydrogen and Deuterium cells, an O2 filter, and a light baffle. The H and D cells contain tungsen filaments. When power is applied to the filaments they dissociate the H2 and D2 molecules into single atoms, which resonantly absorb D and H Lyman Alpha. By changing the temperature of these filaments, a tunable set of filters is created. The O2 cell was designed to filter out unwanted signals near Lyman Alpha.

The detector is a

ceramic channel electron multiplier. It was developed at the MPS by Hans Lauche.

Max Planck Institute for Solar System Research (MPS) in Lindau, and by scientists at the

Institute of Space Sensor Technology and Planetary Exploration at the DLR, in Berlin.