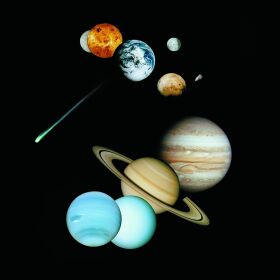 Our neighbouring planets reveal quite different properties from those of the Earth. All of them possess atmospheres, but their densities and compositions vary considerably. There is more volcanism on the Jovian moon Io than on the Earth, as opposed to our Moon where there has not been any for the last three billion years. Water, that essential ingredient for life, presumably occurred on the Martian surface, is nonexistent on Venus, but is likely to be found under an ice crust in an ocean 100 kilometers deep on the Jovian moon Europa.

Figure 1: There are two classes of planets in the solar system: the inner terrestrial planets Mercury, Venus, Earth (with the Moon), and Mars; and the outer gas planets, shown below in a smaller scale, Jupiter, Saturn, Uranus, and Neptune. 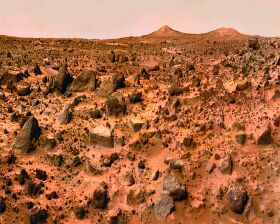 It is fascinating to study these similarities and differences and to investigate their causes. Why did the conditions for life arise on the Earth? How are they to be maintained? Is there life on other heavenly bodies? Scientists seek to answer these questions.

Figure 2: "Twin Peaks" on the horizon of the Mars Pathfinder landing site. The image was taken with the IMP camera, for which the Institute developed and built the focal plane.

The Institute develops and assembles instruments for space missions to the planets. Cameras have flown on the Mars Pathfinder Mission (1997), they will explore the atmosphere of Saturnĺs moon Titan from on board the probe Huygens (beginning of 2005), and are expected to investigate the winds and composition of the Venus atmosphere from Venus Express.

Figure 3 and 4: Artistĺs impression of the Huygens probe descending through Titanĺs atmosphere. The sensor head of DISR (right), which was partly built by the Institute, produces a spectroscopic analysis of the atmosphere and hydrocarbon clouds.

Researchers employ microwaves to analyze trace components in the atmospheres, and they will make use of an infrared spectrometer on the probe SMART-1 to map the chemical composition of the Moonĺs surface.

Figure 5: Infrared spectrometer SIR on the SMART-1 probe, which orbits the Moon.

First preparations for the European mission BepiColombo to Mercury have just begun. Here the Institute is involved in several experiments, among them a laser altimeter to survey the planetĺs topography to within an accuracy of a meter.

Complex computer simulations are used to model not only fast currents in atmospheres but also the slow movements within the planetsĺ solid mantles. The latter are the origins of surface tectonics and volcanism. Dynamo models contribute to our understanding of those processes that generate magnetic fields in the liquid cores of planets.

Figure 6 and 7: Mercury is to date the least studied inner planet. The size of the unusually large iron core is probably 75 percent of the planetĺs size. The Institute is participating in the European mission BepiColombo (launch 2012) to study the surface and inner structure of this interesting planet.
The complex structure of magnetic field lines inside the liquid iron core of a planet, generated with a dynamo simulation (right).

Comets and small bodies - messengers from the past 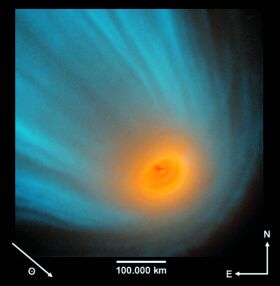 Comets might be described as the great imposters of our solar system. While the size of the cometary nucleus is only a few kilometers, the tail can be as long as several hundred million kilometers, sometimes stretching across the entire sky.

Why are comets so interesting for researchers? They are "time travellers", having been formed during the birth of our solar system out of the primordial matter. Since then, they have spent most of that time in the cold, out beyond Plutoĺs orbit where they have undergone hardly any changes at all. Cometary nuclei have been compared to "dirty snowballs", being a mixture of ice, dust particles, and frozen gases. They contain organic material, perhaps even the building blocks of life itself.

Figure 8: Comet Hale-Bopp in 1997 (comet dust in orange, tail ions OH+ in blue), photographed with the telescope at the observatory on Pik Terksol, northern Caucasus.

The Institute has a long tradition in cometary research. One highlight was the development and successful operation of the camera on the ESA spacecraft Giotto, producing the very first image of a comet nucleus (Halley) in 1986.

Figure 9: The nucleus of comet Halley, about 10 kilometers across, observed with the Instituteĺs HMC camera on board the space probe GIOTTO in 1986. 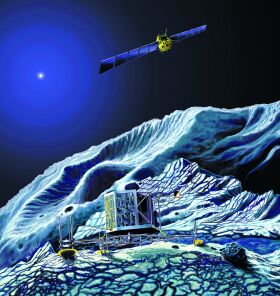 A particular challenge is the development of numerous scientific instruments for the ESA mission Rosetta, including cameras, chemical analysis tools, and essential system components for the lander Philae. Rosetta was launched in 2004, is to match orbits with the nucleus of comet Churyumov-Gerasimenko in 2014, and a few months later, to send Philae down to its surface.

Figure 10: The Rosetta Mission to comet Churyumov-Gerasimenko. The lander Philae will investigate the composition and properties of the cometĺs surface in situ, while the orbiter slowly circles the nucleus making overall measurements. 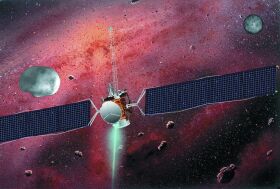 In addition to comets, there are many other small and medium-sized objects in the solar system, especially between the orbits of Mars and Jupiter. The two large asteroids Ceres and Vesta are the targets for the NASA mission Dawn, for which the Institute is providing the cameras. These cosmic boulders are leftovers from the time of planet formation, and were, more or less, left unfinished. Dawn and Rosetta will make definitive contributions to our understanding of how the solar system was formed.

Figure 11: The space mission Dawn will investigate the asteroids Vesta (diameter 500 kilometers, left) and Ceres (diameter 950 kilometers, upper right). The process that forms planets by collision and merging of basic building blocks did not reach completion in the asteroid belt. 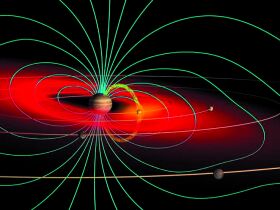 Figure 12: Artistĺs impression of the inner Jovian magnetosphere with the Io gas torus and some magnetic field lines. 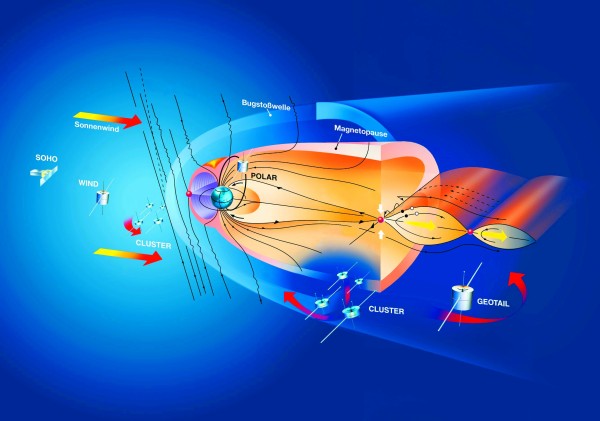 The Earthĺs magnetosphere and the processes occurring within it are those that have been most studied. Instruments that have been developed and assembled at the Institute are on board satellites such as Polar, Geotail, Wind, and Cluster, measuring ions and electrons and collecting important information about magnetospheric processes. Since satellite measurements are always isolated samples from a single point, scientists at the Institute also work with computer simulations to resolve cause and effect of physical processes.

Figure 13: Artistĺs view of the Earth's magnetosphere. The solar wind distorts the terrestrial magnetic field, forming a magnetospheric tail, extending several 100000 kilometers into interplanetary space. The most important research satellites are shown: SOHO, Wind, Cluster, Polar, Geotail. Their on-board instruments are used to study the environment of the Earth, including the magnetosphere. 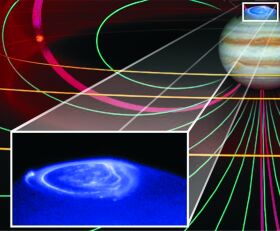 The Institute is also involved in the exploration of magnetospheres of other planets. Its major contribution here was the analysis of data from Galileo, which orbited Jupiter from 1995 to 2003, the first spacecraft to do so. The large-scale ion transport within the Jovian system was determined for the first time by means of an instrument that was partially developed at the Institute.

Figure 14: Artist's conception of the magnetic field lines and auroral light in the Jovian magnetosphere. The picture in the foreground is an actual photo of the auroral light from Jupiter, taken with the Hubble Space Telescope. 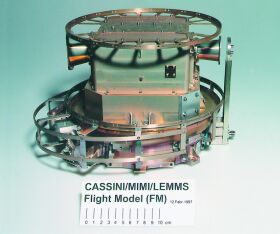 Since the summer of 2004, the spacecraft Cassini has been studying the ringed planet Saturn; the Instituteĺs complex particle analyzer MIMI/LEMMS is measuring the charged particle distributions for comparisons with similar data from Jupiter. Future missions, such as BepiColombo to Mercury, which as part of its program will take a close look at that small but dynamic magnetosphere, will also require the Instituteĺs scientific competence and technical know-how.

Figure 15: Particle analyzer MIMI/LEMMS, which was developed and built at the Institute for the spacecraft Cassini, measures ions and electrons in Saturnĺs magnetosphere.