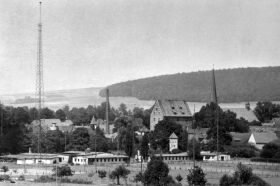 Walter Dieminger established an ionospheric observation station in 1934 at the Luftwaffe test grounds in Rechlin/Mecklenburg. After two moves and a name change, the Dieminger Working Group finally arrived in Lindau (Harz) in March 1946. During that same year, the Institute was incorporated in the then Kaiser Wilhelm Society.

Figure 1: In the first years after its arrival in Lindau in March 1946, the Dieminger Working Group was housed in these barracks and in the large medieval building in the background, the "Mushaus". 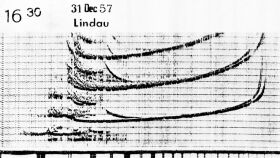 Following the founding of the Max Planck Society in February 1948, this Institute was renamed Max Planck Institute for Ionospheric Research in October. The cornerstone for the first new building was laid in 1954. 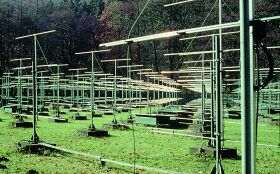 Erich Regener had already shown great interest in the composition and physics of the stratosphere during his tenure at the TH Stuttgart (until the end of 1937). In 1938, his newly founded "Research Lab. for the Physics of the Stratosphere" in Friedrichshafen on Lake Constance became a part of the Kaiser Wilhelm Society. Ten years later, after a move to Weissenau near Ravensburg in 1944, the Institute was taken over by the Max Planck Society. It was finally given the name Max Planck Institute for Physics of the Stratosphere in 1952. After the death of Erich Regener in 1955, the Institute was transferred to Lindau by his successor,

Figure 3: The SOUSY radar antenna field for measuring winds and turbulence in the atmosphere was the size of two football fields. The antenna system of the Heating Facility built by the Institute near Tromsř (Norway) was even larger.

In January 1958 the two Institutes were merged, despite separate scientific leadership, under the name Max Planck Institute for Aeronomy. It was not until 1975 that the two sub-institutes were united under the unified scientific administration of the directors William Ian Axford and Georg Pfotzer. Other former directors are Tor Hagfors and Helmut Rosenbauer.

Figure 4 and 5: The Institute began its involvement in space missions with the first German research satellite "Azur", launched in 1969. The two identically constructed Helios satellites (photo) represent the first highlight of early space research. The shape of Helios was the inspiration for the logo of the Max Planck Institute for Aeronomy.

Following a Senate decision from 1997, the scientific activities are now concentrated in the areas of solar and planetary physics. As of July 1, 2004, the Institute bears the name Max Planck Institute for Solar System Research.

Figure 6: The new Logo of the Max Planck Institute for Solar System Research.

60 years of research in Lindau documented in one book