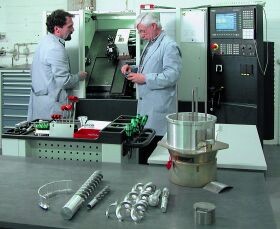 The Institute owes its renowned position to a large extent to the excellent quality of the high performance instruments that it has developed and constructed as part of the payloads on numerous space missions. Among these are miniaturized time-of-flight detectors, gas chromatographs, coronagraphs, UV, IR and mass spectrometers, as well as specialized cameras, such as the ones that took the first pictures of a cometary nucleus (Halley) in 1986 and provided the panorama view of Mars in 1997 (Pathfinder Mission). Here, the Institute’s various laboratories, workshops, and internationally networked computing systems play a major role. Additionally there are technical facilities of the highest standards, such as clean rooms, thermal-vacuum chambers, vibration test devices, optical and CCD laboratories as well as laser installations.

Figure 1 and 2: The mechanical workshops include the areas of precision tooling, electroplating, screen printing, welding, carpentry, and building maintenance. Modern CNC machines permit the most complicated shapes and forms to be produced for space experiments, after which their surfaces are treated in the electroplating shop. 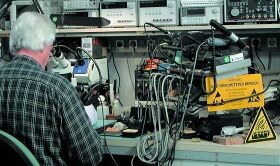 Experiments in space must be able to operate reliably for many years in the hostile environment of high-energy radiation, vacuum, and extreme temperatures at both hot and cold ends of the scale. They must often exhibit features that can only be combined with great difficulty. They must have low mass, high stability, minimal power consumption, and allow for high data rates.

The space agencies DLR, ESA, and NASA invite institutes worldwide to apply for participation in scientific space missions. Only those proposals that demonstrate the most convincing experimental concepts are accepted. The Institute has won participation on about 80 such missions, frequently as a member of international consortia.

Figure 3 and 4: The work places in the laboratories are not only equipped with measuring devices but also with special tools such as lasers for the preparation of surfaces and three-dimensional structures, high-precision measuring instruments for checking specifications, and computers for the development of electronic circuits and chip programming.

The development and assembly of an instrument begin with the securing of the funding. At the same time, laboratory models are produced demonstrating the instrument’s basic functionality, which also serves as a basis for selection against international competition.

Following that, the engineers in the drafting department and laboratory begin developing experimental models meeting the prescribed requirements of size, mass, and power consumption. Powerful CNC machines in the mechanical workshops, mainly in the precision tooling shop, then prepare the mountings for electronic elements and optics, as well as structures and housings. The surfaces are then treated galvanically and with laser tooling. In the next developmental stages, other models are built to test and document the full functionality, which has by then been fully defined. The next step comprises survival tests in the thermal-vacuum chambers and vibration test devices as preparations for the so-called flight model. The components used in this flight unit are assembled with extreme care in clean rooms and are then integrated in the calibration room, after having undergone rigid selection and testing.

Figure 5 and 6: There are five clean rooms at the Institute of various qualities, areas with air containing as few as 3500 particles per cubic meter (in comparison, city air contains more than 100 million particles per cubic meter). Flight units for space experiments are integrated and tested here under the most demanding conditions (for example, special clothing for the staff). 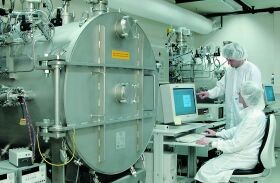 Once the flight model has passed all tests and quality controls, it is integrated into the spacecraft. The final step is the construction of an identical flight spare unit, which experts can use after the launch to support checking and monitoring on the ground and to simulate data accumulation and transfer. Simultaneously, the computing center develops operational and analysis software in collaboration with project scientists.

Some subsystems and software components are contracted out to industry if they entail specifications that cannot be fulfilled at the Institute.

Figure 7 and 8: In addition to a number of thermal-vacuum facilities, there are two new powerful environmental chambers in operation that can accommodate experiments of up to half a cubic meter. Realistic space conditions can be simulated, for example extremely low pressure below a ten millionth of a millibar, as well as temperatures between minus 180 and plus 150 degrees Celsius.