Small Bodies in the Solar System 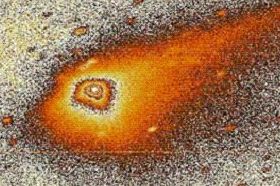 Comets, asteroids, Kuiper Belt objects (KBOs) and some moons of the major planets are considered among the most primordial bodies that survived widely unaltered from the formation period of our planetary system and that are still observable from Earth today. They represent the "memory" on the most original material and on physical conditions that prevailed during the formation of our solar system some 4.6 billion years ago. 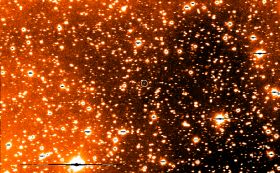 Figure 1: The Rosetta target comet 67P/Churyumov- Gerasimenko, observed with the FORS2 instrument at the 8.2m Antu telescope of the Very Large Telescope Observatory VLT of the European Southern Observatory ESO at Cerro Paranal in Chile. By the time of the observations the comet was at 5.6 AU solar and 4.6 AU Earth distance. The comet appears point-like and is mark by a circle close to the center of the image. Most objects seen in the images are background stars of the Milky Way.

The research project aims at the characterization of the physical properties of these bodies, i.e. their sizes, shapes, albedo, temperatures, colours and surface composition as well as the production of gas and dust in case the bodies show activity like comets do. These physical parameters are determined from observations using optical 4-8m telescopes (

SMT, in the future also

ALMA ) equipped with modern instruments for measurements in the visible, infrared and sub-/mm wavelength range. Furthermore, instrumentation onboard of Earth satellites (

SOFIA ) are or will be used. Special attention is paid to target objects of space missions - like for instance

New Horizons -, in particular for missions with MPS share in the scientific spacecraft instrumentation.

GBOC (Ground-Based Observations of Comets) under supervision and guidance of Prof. Klaus Jockers. 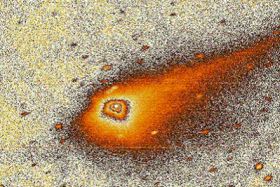 Figure 2: The Rosetta target comet 67P/Churyumov- Gerasimenko when active and surrounded by a coma of gas and dust. The brightness distribution in the coma is non-uniform. This indicates enhanced gas and dust production at various locations at the nucleus surface. 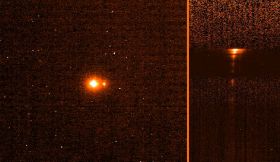 Figure 3: The dwarf planet binary Pluto-Charon (left panel, exposed in the near-infrared K band using the NACO instrument the Very Large Telescope Observatory VLT of the European Southern Observatory ESO at Cerro Paranal in Chile.. The near-infrared spectrum (right panel) of both KBOs displays prominent absorptions bands of various ices at the surface of the objects. The curvature of the spectra in J and H bands (upper part of the spectrum) is due to refraction of the infrared light in the atmosphere of the Earth. 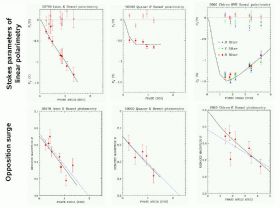 Figure 4: Linear polarization and opposition brightening of Kuiper Belt objects for different phase angles Sun-object-observer. Model calculations of the measurements indicate that at least two different materials exist at the surface of the bodies. 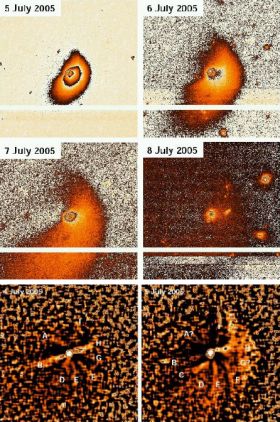 Figure 5: The DeepImpact event at comet 9P/Tempel 1 in 2005. The 4 panels in the upper part show the expansion of the ejecta cloud produced by the space probe impact at the comet. The coma light from normal activity of the nucleus was removed by image processing techniques. The pair of images at the bottom shows linear structures of dust (marked with letters A, B, C, D, E, F, G, H, I) in the cometary coma that are caused by continuous normal activity from areas of enhanced dust emission at the nucleus surface. On 5 July 2007 the ejecta cloud from the DeepImpact event is superposed to the normal activity of the comet.