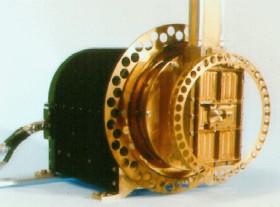 Our solar system moves through the surrounding Local InterStellar Medium (LISM), which consists of a mixture of charged particles, mainly a plasma of hydrogen ions and helium ions, with embedded magnetic fields, and a neutral component, mainly uncharged hydrogen and helium atoms. As the interstellar plasma and the solar plasma, called Solar Wind, cannot penetrate each other because of their embedded magnetic fields, a boundary layer, the Heliopause, is formed, which prevents the interstellar plasma from entering into the solar system. The Heliopause is assumed to exist at a solar distance of about 100 AU (1 AU is the distance of the Earth from the Sun). (Even the two VOYAGER spaceprobes which todate have travelled the largest distance into space, will arrive at that distance only around the year 2005.) Therefore, little is known about the details of the LISM, and the knowledge so far is mainly based on remote sensing techniques.

However, the neutral component of the LISM, not shielded by the magnetic fields can penetrate into the inner solar system and is available for in-situ observation.

With the Interstellar Neutral Gas Experiment of the ULYSSES-Mission it was possible for the first time to directly detect these helium particles. From the observed local angular distributions, the parameters of the interstellar helium outside the heliosphere, the flow velocity and direction, the temperature and density, can be derived. 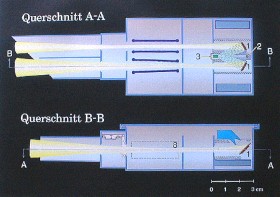 This instrument is designed to measure the local angular distribution of the interstellar, neutral helium particles (Witte et al., 1992).

In principle, the Sensor acts like a pin-hole camera.

The whole celestial sphere can be scanned by using the spacecraft rotation and an instrument-provided mechanical stepping platform to point the sensors optical axis to different cone angles. Angular resolutions (pixel size) between 0.7ox1o and 11ox8o can be selected.

One such "Sky Map" was obtained in January 1992, when ULYSSES was approaching planet Jupiter.

With a mathematical model (Banaszkiewicz et al., 1996) simulating the motion of the particles, their loss processes and their interaction with the instrument, the characteristic parameters of the interstellar helium can be calculated from the locally observed angular intensity distributions.

From several individual observations obtained in the ecliptic plane at radial distances from the Sun between 1 AU and 5 AU between 1990 and 1992 and lateron during the out-of-ecliptic trajectory, average values have been derived ( Witte et al., 1993, 1996). 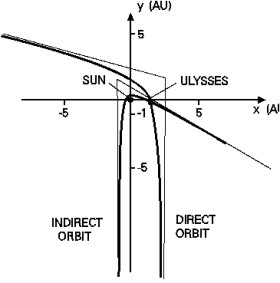 Changing the point of view, the flow of particles in the solar system can be interpreted as the solar system moving through the interstellar medium in a direction (lII=3.6o, dII=16.1o, in galactic coordinates), which is about the direction towards the star Antares (Alpha-Scorpii).

If one wants to infer the densities of the interstellar medium from the measured local densities, the loss rates of the particles on their way to the observer must be known. The predominant loss process for helium atoms is their ionisation by solar UV-light.

One method to determine this loss rate is to compare the intensities of the particles arriving at the observer at direct and indirect orbits. Such an observation was possible in February/March 1995. Particles on indirect orbits had their closest distance (perihelion) to the Sun at 0.2 AE and were ionized by about 99% compared to the particles on direct orbits. This allows (Witte et al., 1996) to determine an average loss rate for photoionisation of 6*10-8s-1 and consequently a density of 1.5*10-2 cm-3 for interstellar helium particles.