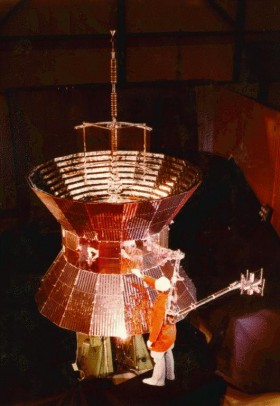 Helios 1 and Helios 2 were a pair of deep space probes developed by the Federal Republic of Germany (FRG) in a cooperative program with NASA. Experiments were provided by scientists from both FRG and the U.S. NASA supplied the Titan/Centaur launch vehicle. Each spacecraft was equipped with two booms and a 32 m electric dipole. The payload consisted of a fluxgate magnetometer; electric and magnetic wave experiments, which covered various bands in the frequency range 6 Hz to 3 MHz; charged-particle experiments, which covered various energy ranges starting with solar wind thermal energies and extending to 1 GeV; a zodiacal-light experiment; and a micrometeoroid experiment. The purpose of the mission was to make pioneering measurements of the interplanetary medium from the vicinity of the earth's orbit to 0.3 AU. The spin axis was normal to the ecliptic, and the nominal spin rate was 1 rps. Instrument descriptions written by the experimenters were published in Raumfahrtforschung 19/5 (1975).

The largest data base of

NSSDC). Hourly Helios 1 & 2 plasma and magnetic field data are contained within the

COHOWeb interface. The value of COHOWeb, besides its data subsetting and graphical display functionalities, is that each of many deep space spacecraft (Ulysses, Voyagers 1&2, Pioneers 10&11, etc.) have common data records (IMF vectors in a common coordinate system, s/c position vectors in a common coordinate system, etc.). This is an excellent starting point for multipoint studies of interplanetary phenomena (spatial structures and evolutions of interplanetary shocks, CME's, etc.).

Plots of the Helios mission

The plasma experiment aboard the Helios solar probes consists of four independent instruments designed to investigate the solar wind plasma. By measuring the velocity distribution functions of the different kinds of particles, all important hydrodynamic parameters of the solar wind plasma can be derived. Three instruments (I1a, I1b, and I3) analyze the positive components (protons and heavier ions with energy-per-charge values from 0.155 to 15.32 kV) of the solar wind. Two of them allow for an angular resolution in both directions of incidence. One instrument (I2) measures electrons in the energy range from 0.5 the 1660 eV with one-dimensional angular resolution.

The flux-gate magnetometer experiments use triaxial, orthogonal flux-gate sensors of the Forster type mounted on a boom of about 2 m from the spacecraft. The bandwidth is 4 Hz. Two measuring ranges are used with automatic switching. The sensitivity range extends from -100 nT to +100 nT.

The complete merged data set for the plasma experiment E1 and magnetometer experiment E2 for both Helios 1 and Helios 2 is available for local use at MPS on 19 MODs. The E2 data is averaged to match the time resolution of the E1 data. (Highest time resolution: 40.5 s/spectrum.)

Selected parameters of the complete data set (19 MODs) have been compressed to fit on one CD.

The University of Iowa

particle experiment E6 (University of Kiel) consists of a detector telescope containing five semiconductor detectors of increasing thickness, a sapphire Cerenkov deteector surrounded by an anticoincidence scintillation detector, and an on-board handling system. The instrument is capable of measuring protons and heavier nuclei from 1.7 to more than 400 MeV/n and MeV electrons.

The spectrometer utilizes an inhomogenous magnetic field for separation of charged particles. Protons (and heavier particles) traverse the magnetic field almost unaffected and are detected in a telescope arrangement consisting of two semiconductor detectors. Electrons are focused and detected by four semiconductor detectors. Positrons (if present) are deflected in the opposite direction and detected in another detector.